Flat Head Syndrome: Everything you need to know 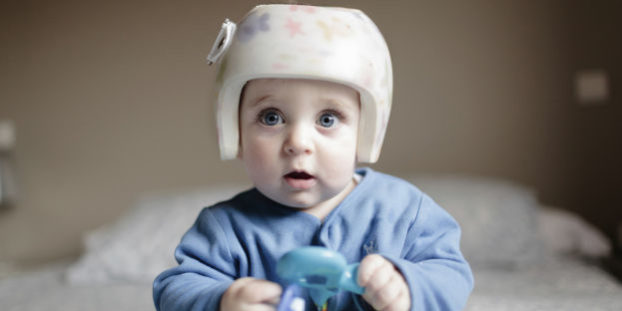 Plagiocephaly, also known as Flat Head Syndrome, is a condition that occurs due to baby’s position in utero or positioning after birth. This happens whenever there is repeated pressure on one spot of the skull. It’s a super common position, but the good news is that it’s also easy to treat.

Why does Flat Head Syndrome occur?

You see, newborn babies have malleable skulls, so they have soft spots and bones that aren’t fused yet, which can cause the skull to form into shapes other than round. The reason why babies have malleable skulls is to allow for growth, of which there will be loads. Although the un-fused skull allows for brain growth, it can also allow for a misshaped head if there is too much pressure in one area.

Babies with Flat Head Syndrome are also prone to a secondary condition, called torticollis. This condition occurs when there is tightness in one side of your baby’s neck muscles. It can be caused by your baby’s position in utero and can be diagnosed by assessing the way a baby turns his or her head. Babies that always look in one direction and seem to be uncomfortable when their heads are turned in the other direction might have torticollis. If this is the case, your baby might need occupational therapy or physical therapy to help release the tight muscles and work on proper positioning.

Are there risk factors for Flat Head Syndrome?

Babies that are born prematurely have a higher risk of developing Flat Head Syndrome because they spend a lot of time in one position in the NICU incubator. The occurrence of the condition also increased since 1992, when the American Academy of Pediatrics recommended that all babies sleep on their backs in the “Back to Sleep Campaign”. The campaign was launched to help reduce the risk of Sudden Infant Death Syndrome, and although it did decrease SIDS rates, it increased the Flat Head Syndrome rates.

How is Plagiocephaly treated?

Parents can use gel pillows to help decrease the pressure on the skull, but you might also want to consider the Tortle. The Tortle is a hat that prevents your baby from turning his head so that there isn’t any pressure on the flattened part of the skill. If a gel pillow or the Tortle doesn’t seem to be working, your paediatrician might refer you to a pediatric neurosurgeon, which might refer you to an orthotist. This specialist will probably design a helmet, customized to your baby’s head, specifically designed to achieve symmetry. Although helmets are most effective between the ages of 3 and 6 months of age, correction is still possible up to 18 months.

Can I prevent Plagiocephaly?

There are a lot of preventative measures that can be taken with older babies, although not all of them can be used on premature babies. Here’s what you can try:

Carrying your baby vertically will help eliminate the risk of pressure being placed on their skull.

Regularly move your baby’s mobile from one side of the crib to the other so he or she won’t always be in the same position while gazing up at it. Try to alternate positions while feeding your baby to help keep the pressure on his or her head symmetrical.

Eliminate time spent in baby carriers, car seats, and bouncy seats, which all puts pressure on your baby’s skull.